We are delighted to announce the sale of Exterity to French company Vitec S.A.  Exterity, based in Dalgety Bay, Scotland, is a market-leading provider of IPTV Technology, Digital Signage and Guest Experience solutions. 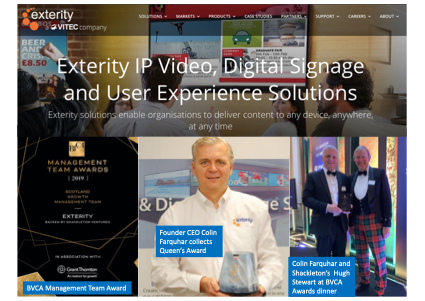 Shackleton’s third fund, Shackleton Secondaries 3 LP, originally acquired a significant interest in Exterity in April 2014 as part of a portfolio of 13 investments.  Shackleton played an active role on the board, particularly after the company invited Shackleton Managing Partner Hugh Stewart to become chairman, helping to focus the company’s strategy towards vertical market applications and to raise the company’s profile.

This strategy bore fruit, with 2019 revenue more than doubling from the year prior to Shackleton’s investment and EBITDA growing over 8 times to £1.6m.  That year Exterity won a BVCA Award for Scottish Growth Management Team of the Year.  Exterity sells to more than 50 countries, with over 80% of revenue being international.  This success was recognised when Exterity received The Queen’s Award for Enterprise: International Trade 2020.

Hugh Stewart, Shackleton’s Managing Partner said: “We are delighted to have been involved with Exterity.  Not only has it been an excellent investment, bringing significant profit to our fund, but it has also been a thoroughly enjoyable experience.  The Exterity team are first-class, as has been recognised in their awards, and our meetings have always been positive in outlook, even when the company has faced serious challenges. The top team of CEO Colin Farquhar, CTO Mike Allan and COO Simon Ross have built a strong and excellent culture and Vitec looks to be an excellent fit. We wish the company and the employees the best for the future.”

Colin Farquhar said: “We have greatly enjoyed working with Shackleton who have shared our vision of creating a successful international business while also keeping us focused on building shareholder value. We are delighted to have delivered them a strong return”.

In recognition of Hugh’s contribution Vitec S.A. has erected a statue of him in their foyer.

Shackleton’s investment in Exterity was from its third fund, Shackleton Secondaries 3 LP, formed in 2014. As a result of the sales of Exterity, and of DEM in 2019, this fund will move into cash profit, and is on target to yield a return consistent with Shackleton’s mature first and second funds which have so far produced cash return multiples of 2.1X and 2.9X respectively, with further exits planned in both cases. In total, including Exterity, Shackleton has had 25 profitable exits since the firm’s formation in late 2006. 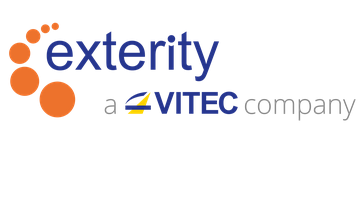